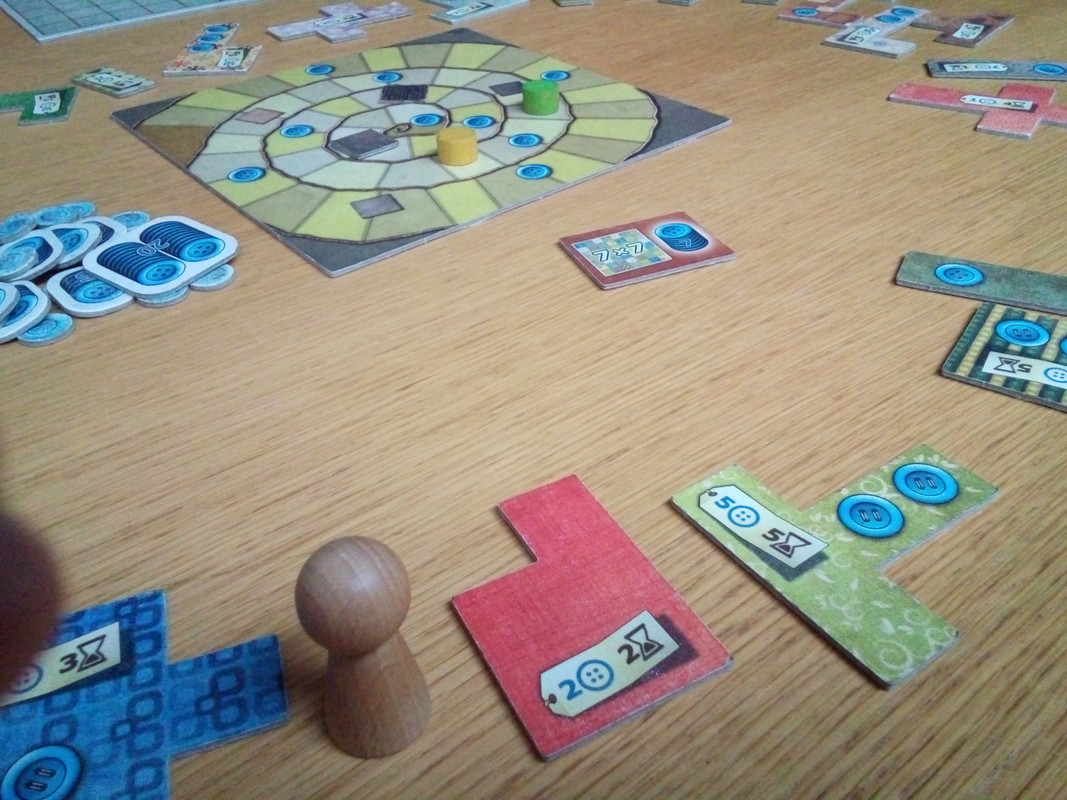 From ancient times, people yearned to understand more of the world.

This I’d argue has very little to do with curiosity, but all to do with necessity. The need to avoid sickness, bad harvest, war, or simply a bad spouse. Since both the human mind and the tools it uses are limited, even today, let alone thousands of years ago, divination arose.

Much as some of us would like to think otherwise, we are mostly ruled by our emotions. These are not just the big and obvious, but also more subtle, more passive and pervasive ones. A sense of (dis)comfort, an instinct, a slight nagging at the corner of the mind… These subtle emotions are easy to dismiss, or ignore. However they often tap into the subconscious, into our inner perception and understanding of the world. For that reason, divination searches at the source of exactly those emotions to find answers, as it rightly realises there is something to be learned there.

In order to help on that path of understanding, humans employed their intrinsic proclivity towards tool-making, and so precursors to board games were created. Over time, games branched out and acquired other purposes and forms, but every now and then they slip back, sometimes even unknowingly into their original role of divination. Such is the case with Patchwork.

The experience is eminent right from the set-up, with a clear callback to the old throwing sticks.

A slew of multi-shaped tiles, each unique, are tossed into the air to randomize their position allowing destiny to leave its mark. There is something wildly satisfying in the complete unpredictability of the ensuing result, a sense of uniqueness that is born from it, which is crucial in validating the method, since we understand our lives and key moments in it especially, as one of a kind events.

Another throwback to ancient times comes from the game layout. Tiles encircle the central spiral track, a clear representation of a temporal device, like a calendar or a sun dial, which makes for a different, more precise approach. Measuring of time is the most accurate way to predict the future to date. So much so, that it stops being a tool of divination, and becomes that of predestination. The idea of destiny has been a long obsession of mankind, many ancient myths and stories dealt with it. In many ways we are not liberated but rather entrapped by this knowledge. This reveals a paradoxical nature of sapience, to a fool the world is open to a myriad of possibilities, while the wise man is bound by but a few of them.

Lastly, all forms of divination usually find their justification in tradition. Past acts as a rooting system that nourishes any speculative venture into future or indeed present. Thus the theme is very appropriate. Patchwork is amazingly astute in representing an assemblage of past experiences converted into something new. As an undertaking in which you wrestle chaos into order, it invokes strong mythological connotations, creating a somewhat tautological self-confirmation. 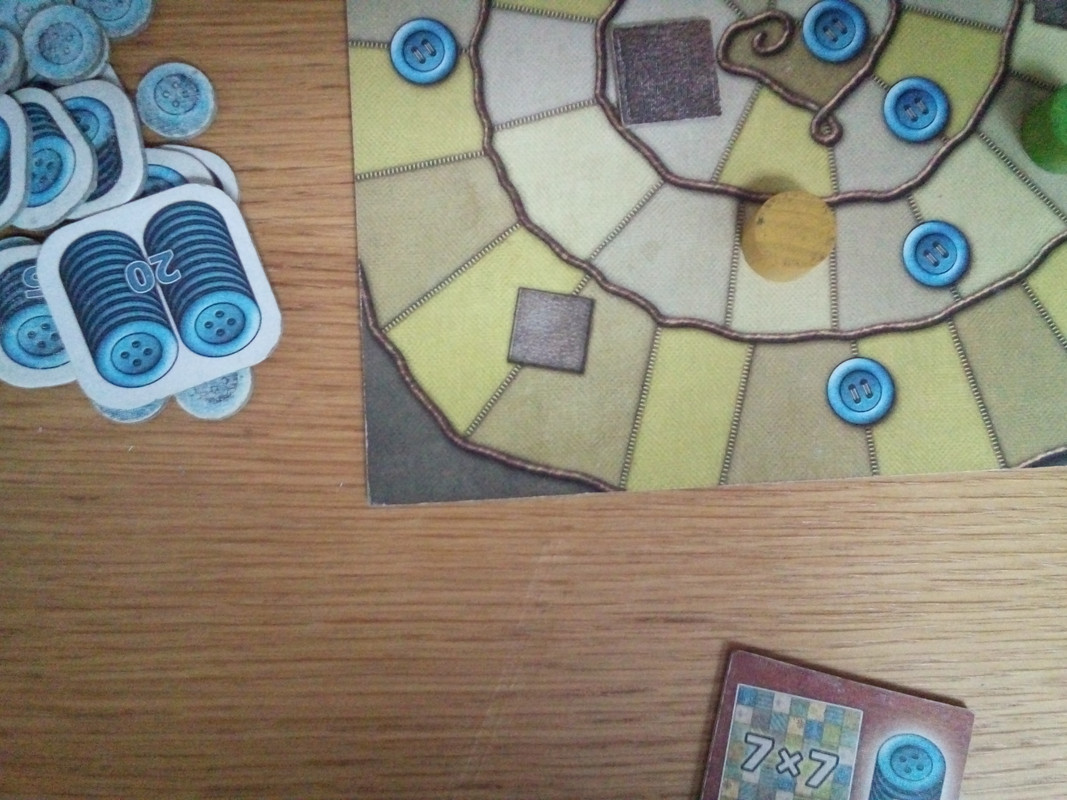 There are however modern elements to Patchwork (beyond its year of naissance).

One of those is the fact that it’s a two player game with no luck. Neither is modern on its own (sic!), but it is when coupled with divination. Unpredictable forces have traditionally had primacy in influence on the world and consequently on ourselves. Religions for instance, we could argue, formed as a tool in dealing with and combating that reality. Modernity though offers a different experience. With the advent of science and apparent understanding of the world, the scope of unpredictable narrowed.
Another shift happened in regards to perception of homo sapiens. Through the majority of human existence, we were but a slice of nature, and as such we bowed down and looked for meaning in the world around us. However with the huge increase in population, birth of psychology, and mastering of our surroundings, the focus shifted almost entirely inwards – to ourselves. We no longer search for meaning out there, but rather right here. The wisdom, zeitgeist says, comes from simply exploring and conquering ourselves, like we once explored and conquered new lands; subconscious is a function of human and not divine. That’s why Patchwork is not a solo game. It relies, in fact, on homo homini lupus est. Certainly not a modern concept, but exemplified in the world of anthropocentrism. Today, the only measure of a man, is another man. There are no more dragons to slay. Hence the most competitive player count that doesn’t allow one to hide, from the other, nor from self. For those reasons, a throw of the dice no longer accurately represents a modern understanding of divination. We don’t need a divine mediator such as chance, to tap into ourselves, and from there into the world. What we need is a mirror, a complete inversion of the ancient view. This realisation unveils why it’s even possible to speak of Patchwork as a divination tool.

A modern approach also shows itself in accumulation of points. The laws of nature are pretty simple, approximated by live or die, and by the longest time we lived primarily on those settings. The advent of civilisation brought a degree of nuance, a degree of separation from such polarities. It is not however until recently and the age of numbers that the concept truly took off. Today’s is the world of counting, measuring and enumerating, and thus the feedback gained from divination also needs to be quantifiable and gradable. Once, a shaman would look at a liver and say it’s too red, today he would say it has too high a red cell count. 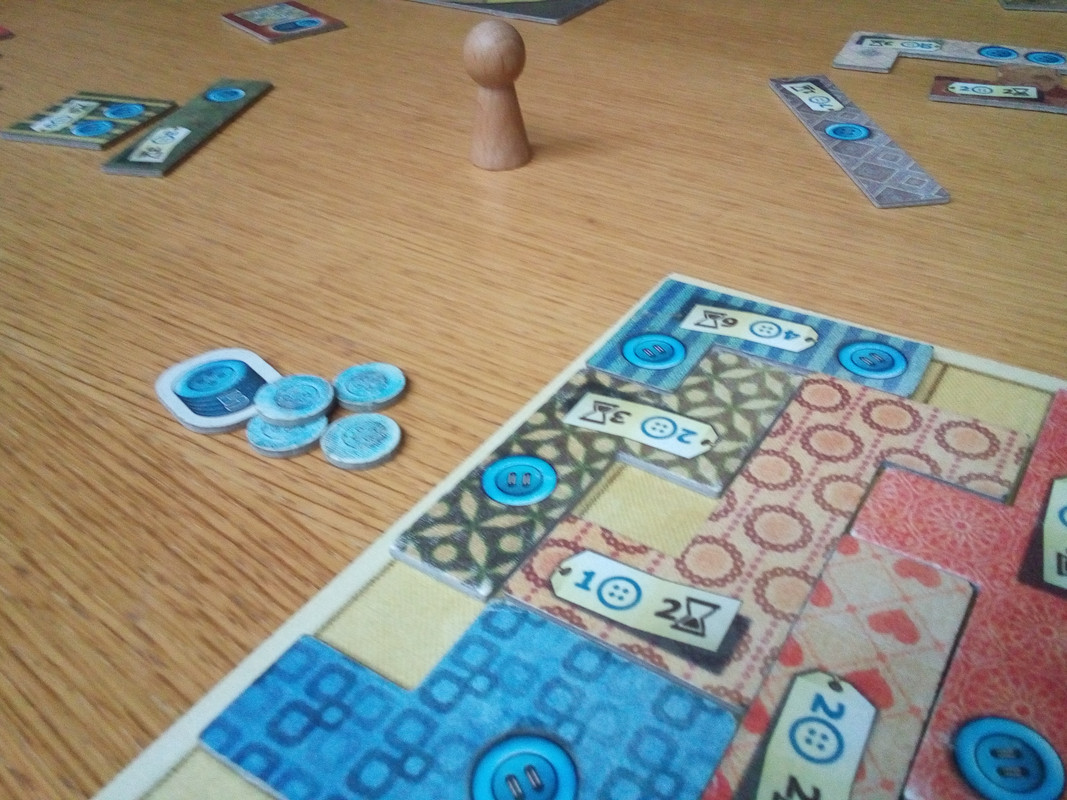 To make sense of it all though, one must step into the game and play it.

Divination is an act, it is a doing, a process. As I suggested at the beginning, all the tools are nothing without the self to use them, and the self to interpret them. Every action taken is reflective, and assessing your opponent’s moves acts more like a function of assessing your own. This is because the main tension comes from dealing with your intuition and (in)ability to perceive the best placement of tiles on your board. Therefore you strain your third eye and in the process visit corners of your mind you are seldom aware of. Furthermore, every decision is multilateral and consequential, requiring your full attention, forcing at least a part of your brain to rely solely on instinct. Thanks to that, true divination occurs and its results can be trusted. In order to read from a coffee cup you first have to make and drink the coffee, in the same fashion, in order to read from the final layout of your board, you have to go through a process of picking tiles and patching your budget of buttons.

In the end, Patchwork is a divination game because in it wining isn’t everything, it is in fact barely of significance. A sense of achievement is had regardless, that of a custom tailored experience. That of a spiritual kind. I don’t go to church, I play Patchwork.